Extremadura, in southwestern Spain, is the region with the largest expanse of open range in Europe, the habitat where Iberian pigs are at their best. Its holm oaks, cork oaks and pastures provide a diet for many of the Iberian pigs that are slaughtered and cured in other parts of the country, such as Salamanca or Huelva, where this type of woodland is less common.

Extremadura has an extensive and diverse historical and artistic heritage, from prehistoric archaeological sites to the impressive presence of Roman culture and vestiges of Visigoths, Arabs and Jews. Mérida, founded in 25 A.D. and included on the World Heritage list in 1993, preserves significant Roman remains. Other cities like Cáceres, placed on the World Heritage list in 1986, and Trujillo, are noteworthy for their monuments and architecture, due in part to the riches invested by the conquerors of America starting in the 15th century.

The Dehesa de Extremadura Designation of Origin is a protected DO applied to Iberian jamones and is controlled by a Regulatory Board created in Mérida in 1990. It covers the entire region of Extremadura, although most of the rangelands are in Badajoz province. 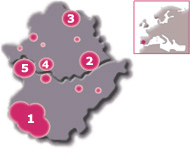 Iberian jamon products are processed throughout Extremadura, making this region the country's leading producer. Nearly a million hectares of open range are used by some 1500 livestock breeders. The main processing areas are in the mountain ranges of southwest Badajoz (1), Ibor and Villuercas (2), the southern Gredos mountain range (3), the Montánchez range (4) and the San Pedro range (5). This is where most of the hundred-odd processing plants registered under the PDO are located.

The main difference between the Dehesa de Extremadura PDO and others is that it can only get its supply of animals from the Extremadura rangelands, whereas other PDOs can acquire animals from any part of Spain.

Characteristics of the Dehesa de Extremadura Designation of Origin 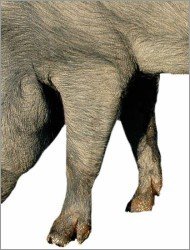 Foreleg of an Iberian pig

The livestock authorised for processing jamones and paletas (shoulder hams) under this PDO must be purebred Iberian or a cross including at least 75% Iberian bloodstock and 25% Duroc-Jersey.

Since 2014, the term "Pata Negra" (black hoof) may only appear on labels if the jamon in question comes from a pure-bred Iberian pig, and not from one that has been cross bred. The seal on such jamones is black (a red one is used for jamones that come from acorn-fed, crossbreed pigs, and a green one is used for jamones ibéricos de cebo, i.e. jamones that come from Iberian pigs fed on cereals).

The Regulatory Board for this PDO is one of the most stringent in its production-process control. Its main activities are:

Labels may also refer to the animal's genetic traits, distinguishing between purebred Iberian pigs (100% Iberian stock) and cross-bred pigs (with at least 75% Iberian bloodstock). Crosses with the Duroc breed give slightly less fatty jamones with a higher proportion of lean meat, although it takes a very experienced palette to note organoleptic differences. 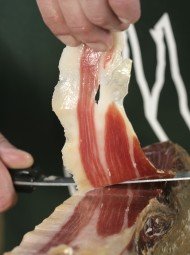 The deep red colour that appears on cutting is typical of free-range animals of advanced age (18 months). The marbling fat causes the glossy white streaks that characterise Iberian pork products and makes them juicy and tender. The lustre is due to the low melting point of the marbling fat typical of acorn-fed pigs, and the intense, persistent aroma and flavour come from long ageing. Dehesa de Extremadura jamon is also known for its low salt content, resulting from optimum climate conditions that make the salting period shorter than in other parts of Spain.

How to recognise a Dehesa de Extremadura jamon 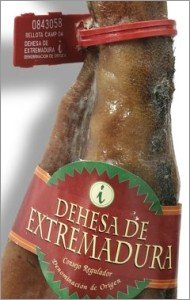 Seal and label identifying it as a Dehesa de Extremadura jamon

» By its unbreakable plastic seal with Denominación de Origen Dehesa de Extremadura on it. Jamones are numbered, bear a code indicating the year of slaughter and are colour-coded according to grade: black (bellota 100% Iberian bloodstock), red (bellota 75% Iberian bloodstock) and green (cebo de campo).

» By its numbered label, attached to the shank with the Designation of Origin stamp in the same colour code as the seal.

» By its curing period lasting more than 20 months for jamones and 12 for paletas.

» By its slender shank and characteristic rounded, non-angular shape.

» By its fat glossy, fluid and soft to the touch.